If the system was broken before, it’s shattered now. Students from marginalized communities are not interested in returning to normal, because normal was inequitable.

But rather than trying to fix old, broken pieces, let’s sweep them aside and reimagine a new picture.

It’s time for a new theory of change.

This is our opportunity to release our most underutilized secret weapon, educators who’ve proven the hard is possible. Those who have had their gift and impact stifled and tucked away by those who were unable to recognize them.

They are still “waiting on Superman” and it’s time to bring that waiting to an end.

What would it take to identify what’s working in turbulent times and scale it?

What would it take to interrupt the cycle of strategies that sound good in white papers but fail miserably when implemented?

What would it take to lead enduring change that centers racial equity?

All it takes is a shift in power. It requires entrusting more power to those who have proven themselves worthy of it. It means positioning those most impacted by the change as designers of the change.

This is the mission of Get LaunchED Consulting™

The concept came to me while I was on a consulting engagement for a client. I was assigned to a team of four consultants to visit one of the largest and most diverse school districts in the country.

Of the four consultants I was the only woman and the only person of color. I was also the one with the most recent experience actually working in a school.

The unfortunate reality is that the education consulting industry reflects the same racial and ethnic representation gap that exists in school systems.

Black and Hispanic students account for 15% and 27% of all public school students.

Only 7% of public school teachers are Black and only 8% of teachers identify as Hispanic.

Yet we continue to ignore the problem.

After experiencing the racial and gender disparity at the engagement, I began thinking about all of the phenomenal educators I knew who could get any district together and solve their most challenging problems because they had already done it in their own classroom, school, or district. The only thing keeping them from a seat at that table was the knowledge of how to start an education consulting business.

This system is old AF and big as hell and we won’t dismantle it without a radical shift in power. It takes scaling the community expertise and experience of high-performing educators to make the necessary large scale impact. 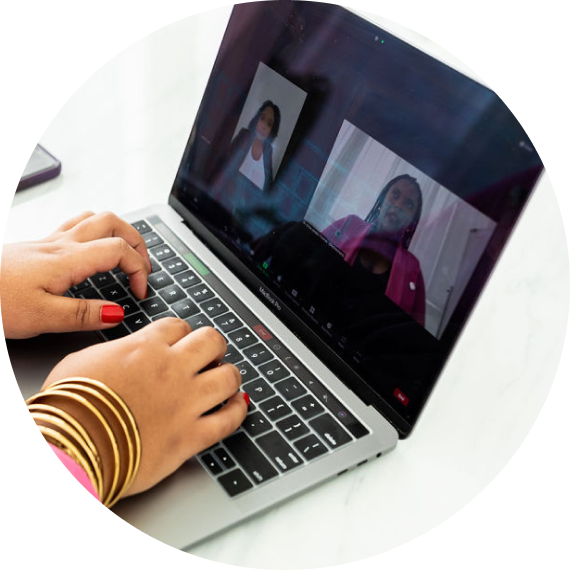 Get LaunchED Consulting™ is the incubator in which we cultivate the power of successful educators in a manner that allows for sustainable and scalable impact . We are on a two fold mission:

#1 – We seek to shift the power dynamics within the education sector.

#2 – We seek to disrupt the racial wealth gap by helping educators from marginalized communities increase their net worth.

We understand that this is not a journey to embark on divided, it’s a journey that requires abundant thinking and socially empowered educators moving towards one united vision.

Wondering if we’re all talk like those other programs? Well, here are a few of our receipts:

Through our program, we have helped 187 educators launch their education consulting business

Over 90% of the educators we have served identify as people of color with over 80% of our clients identifying as Black women (We don’t think this is a coincidence given that our founder is a Black woman who believes in the immeasurable power of Black women.)

Over 90% of our clients agree that as a result of our program they have identified the problem they are solving in their business, their target client, their service model and at least one branding strategy.

That’s the number story, but there’s also the lived experience. Here’s what our clients have shared about their time in Get LaunchED Consulting™ are just a few of the many business milestones we have celebrated with our clients…

“At the beginning of this journey, I was all over the place. I accepted jobs and projects that didn’t align with my purpose.” – Get LaunchED Consulting™️ Client

“Identifying and getting rid of the mind trash that was standing in the way of me making $10,000 and $100,000 decisions was HUGE!” – Get LaunchED Consulting™️ Client

“Since being in the program, I now have a much clearer idea of how to build out my vision to help others on their education and leadership journey and I feel much more equipped to actually take the steps to actualize my vision.” – Get LaunchED Consulting™️ Client

“I have created the blueprint for my business. I have put myself out there by accepting two interview engagements and participating in panel discussion.” – Get LaunchED Consulting™️ Client

“I am so proud of investing the time and money in myself and creating wealth for my family. I am extremely proud of the mindset work that I was challenged with but addressed so that I can “check myself” whenever necessary in order to continue moving my business forward and making a meaningful impact in my life, family’s lives, career, future, and the world of education.” – Get LaunchED Consulting™ Client

“I secured $20,000 in new consulting and workshop fees. I submitted a proposal for a school district conference in NJ. Overall, I have more clarity on how I can contribute to education (by staying in my lane and not doing everything).” – Get LaunchED Consulting Client

“I have restructured my existing LLC to focus on clients and activities that will help me reach my goals and have the largest impact! It is no longer a guessing game, I am confident in what I bring to the table and what I am going to charge.” – Get LaunchED Consulting™️ Client

With each consulting business our clients launch, we are increasing access to the expertise of educators with a proven track record of success. Every consulting contract earned is money paid to a values-driven educator who has historically been underpaid.

Are you ready to paint a new picture together? A picture of a different kind of power structure and one that’s more equitable.